You might know of FXIs Cotton Candy Stick.
An exiting little device turning any HDMI Capable device into a computer running Android or Linux.
Now Telefunken has announced at this weeks IFA that they will sell the product "Telefunken Smartstick".
This is great news for the Norwegian based company who made this product. 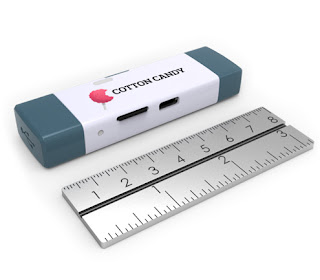 Hopefully you will be able to catch a Hands-On review of this device here in a near future.

TELEFUNKEN SE is moving into the growing market of micro-computers

One of the world’s smallest computers on a USB stick

Compatible with every monitor, television, smartphone and computer via HDMI, USB 2.0, Bluetooth and WLAN

Compatible with Windows, Linux and Mac based devices

With the final retail version of the TELEFUNKEN Smart Stick, users will be able to process and present data on a monitor anywhere in the world, accessing it from a smartphone, a tablet computer or in the Cloud. They can also view their photos, videos and films in HD quality, as well as access smartphone apps and Internet games.

Different worlds, but only one device

Users will be able to choose between Android and Linux operating systems, allowing content to be easily presented, processed or exchanged on either a Mac or a PC. A Bluetooth and WLAN interface on the TELEFUNKEN Smart Stick will provide a connection between the display and various input devices, such as a mouse or keyboard and ensures smartphone communication.

“Thanks to the support of FXI Technologies we are pleased to have won a partner who meets our high standards and quality and offers high level of innovation,” says Sergio Klaus-Peter Voigt, CEO of TELEFUNKEN SE. “With access to the FXI any screen micro-computer architecture, TELEFUNKEN would be able to service many markets and applications with the same level of service and performance the brand is known for,” supplemented Borgar Ljosland, CEO of FXI Technologies.

The market introduction of the TELEFUNKEN Smart Stick is scheduled for the end of 2012. Specifications including retail price and distribution channels will be released just prior to launch.

Since the company was founded in 1903, the TELEFUNKEN brand has stood for the basic principles of German engineering, namely high quality and innovation. Today, a company owned by TELEFUNKEN SE, Frankfurt/Main, holds the rights to the trademark. Together with companies belonging to the TELEFUNKEN Partner Alliance, a worldwide network of independent enterprises, and as part of its own industrial business operated with the participation of TELEFUNKEN partners, products reflecting the traditional brand values are developed and distributed in the fields of consumer electronics, innovative lighting technologies, hi-fi, major electrical appliances, car entertainment, healthcare, smart building solutions/home control, home security, IT and communications electronics.