An increasing number of people all around the world are "cutting the cable".
In other words cutting the bill with their regional Cable TV providers to join the increasing numbers of users of the IP-TV and  Content Streaming companies.
This has been ongoing for some years now and finally we are seeing some maturity being shown in the deliveries of the services .

Androidistica has previously covered Netflix and HBO Nordic but there are many many more to be used for your media consumption needs.
Magine cant really be compared to those two contentwise or even as competitors since their focuses differ quite a bit.

One of them is Magine.
Magine can be best described as a IP-TV live streaming site with some recording options.(I'll come to that in a bit).
Magine delivers what a regular TV does nowadays, with the big difference being you get it from Magine to any device that has a Internet connection of some sort.
Today Magine supports, iOS (iPads, iPhones), Smart TV:s and computers and tablets with Flash supported browsers.
Android clients are on the coming up agenda so we will be covering them aswell as soon as they emerge. 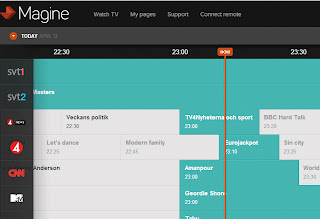 Once logged into Magine on a PC you get the EPG-flavoured view as shown above.
From there you just click on the row with the program you want to watch and grab your popcorns! 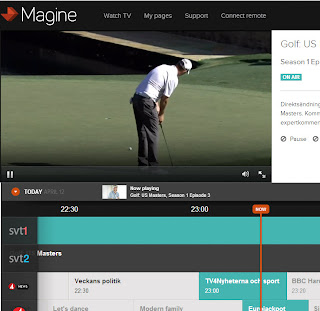 Some shows are available for up to a week after the original airing date and some are just pure live streams.
(All that boils down to Immaterial rights deals amongst the companies producing the material.)
This is not presented in any way on the EPG when we tested Magine.
All you get is a notification about "This show is not enabled for pausing" when you press pause.

Not a big issue but a noteworthy one and surely to be fixed by Magine as Androidistica is on the early ride of things once again . ;)

The channels you get access to is determined based on where your cellphone number is registered .
So the above examples presents some of the channels you get living in Sweden, other regions propably presents other channels .
The controls are quite basic, play/pause, Volume and Enable/Disable Full Screen.
You do have the option to use your iPhone or iPad as remote control but this option is not yet available for Androids.
You can watch Magine content on two devices on the same account simultaneously but not the same channel  on both devices.
On the bandwidth requirements Magine recommends as lowest a 700 kb/s and 8 mbit/s for optimal experience.
As far as pricing goes with Magine there is something golden here .
Magine free is the account you get signed for when registering for this service.
For that you get 7 channels for free !
If you want more , theres the "Magine 1st", which gives you total of 30 channels for a price of  99 SEK (Rougly 12 Euros/month).
Magine uses monthly payments , no extended periods of years to bind up to .
If you want to finish you Magine account after one month, two days before the last day of the month is promised to suffice to end the subscription.
Magine is today an invite only service , so make sure to claim you invite over at their home nest.
This is a good take on TV content providing.
More and more people are getting accustomed to watch what they want when they want.
The TV Guide planning days are over .