27th of April marks yet another milestone in Samsung Galaxy S era being the relase date for their "Samsung Galaxy S4".
Like a love child spawned from the previous S3 and Note 2 models, the Samsung Galaxy S4 does push the boundaries for mobile consumers in a forward and bold direction.

Reports show that the record breaking pre-orders have beaten the numbers from Samsung Galaxy S3. 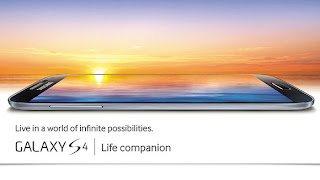 Despite the fact there have been opinions aired about the S4 not being a complete showstopper a look into the details really forces one to reconsider.

Promoted as "The life companion", Samsung really has put effort in collecting personal life details into this device as you will see.

You will be looking at a  5 inch Super AMOLED HD screen delivering smashing colours and detail .
Installed with the latest Android 4.2.2 and Samsungs faithful companion Touchwiz interface, nowadays called the "Nature UX".
There is a 13 megapixels camera with numerous new features like dual shot and tons of other picture and video tweaking options at hand.

A legacy from the Note 2 is the ability to hover your finger over certain items to get the "pop-up" preview feature on images for instance.

We havent even touched on the S- Healt, monitoring heartrates, steps taken, runkeeper and fitbit compatibility and the list goes on.

A wide range of accesories will naturally accompany the S4, from customized flipcovers, to gaming console addons and the already mentioned wireless charging options.

With a release cycle matching the car industry , Samsung is surely keeping competition on it's toes .

With a bit of luck, in a galaxy not too far from you there might be a chance to read a full hands-on review of the Samsung Galaxy S4 right here on Androidistica.

If youre in a market for a new phone, theres really no excuse to NOT check this one out.