Jolla bringing the other half to the universe.

Jolla revealed their device today and it's available for preorder with different perks if you like.
Now what is the device equipped with then ?
To begin with the Jolla Sailfish OS, with true multitasking enabled and Android app compatibility.
This is a smart move and not a bad one at all with the increasing numbers on android apps soaring into the Google Play store.
(Details dont tell yet if the Jolla will have Google Play installed or if the apps need sideloading of some sort.)
Equipped with a dual core cpu, 4G enabled , 8 megapixel camera , replacable battery and 16 Gb of onboard storage .
There will also be a microSD card slot to be able to expand a bit on the storage side.
The screen size, 4,5 "Estrade display" dont tell the actual display resolution but these details we will surely find out. 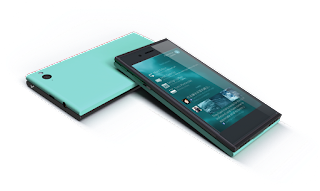 "Will be" is used here since the Jolla phone is said to be shipping at the end of 2013.
This of course has raised some eyebrows since were not even half way through 2013.
Released in Europe first and different pre-order rankings makes this a worthy contender on paper for the already existing platforms and manufacturers of smartphones.
It will be an interesting end of the year , and Androidistica will do it's best to keep you updated .
at May 20, 2013