Geeksphone ,the company that released the Mozilla Firefox OS (HTML 5 based OS) have announced a new model,the Peek+ available for preorder.
Limited number of units are available and here comes a quote from the press release regarding the specs:
"
Peak + is equipped with a dual-core Qualcomm 8225 chipset running at 1.2 GHz,  4.3” qHD IPS multitouch screen, 8-megapixel rear camera with flash, 2 megapixel front camera, and tri-band UMTS / HSPA and a long-lasting 1800 mAh battery.

Besides 4GB of internal storage and up to 32 GB expandable by MicroSD, the Peak + will come with 25GB of cloud storage, that can be synchronized with other devices through the web. The 25GB cloud storage service has been incorporated in cooperation with Fiabee, a leading company offering a cross-platform sync/share technology (www.fiabee.com). The new Geeksphone terminal represents the commitment of Geeksphone towards a future in mobility based on the Open Web, break down barriers generated by other mobile ecosystems, and promote a context in which the voice and freedom are returned to the end user."

With a bit of luck Androidistica might come up with a hands on review of this baby.
Stay tuned and stay safe kids! 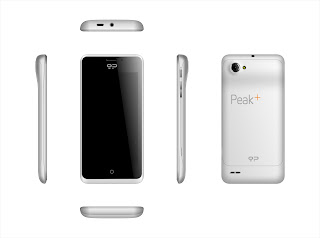