At last the time has come for mankind to tear away the shackles of dependency in the field of file copying between Android device and computer.
Yes, the entire Android 4.1 (Jellybean) user base can now move files between a micro USB equipped Android phone,tablet,HDMI stick or set top box to a computer with a USB port.
(There needs to be USB OTG support on the Android itself too).
This has been envisioned and built by Leef designs via the 'Leef bridge'.
Simply put the Leef bridge is a flash drive with a micro USB AND standard USB port.
Storage sizes available are 16GB and 32 GB and a 64GB version to be announced .
The Leef bridge tested in this review was connected to a Samsung galaxy note 2 and while copying files from and to the Leef bridge to the external SD card speeds were quite satisfying.
Copying from the ext SD card to the Leef took about 15 minutes for 4GB of data.
Doing the opposite, copying 4GB of data from the Leef to the ext SD took slightly less time with 11 minutes.
(An Android 4.0.1 ICS powered Galaxy Note (N7000) was fed the Leef bridge and that too worked fine.)
Leef designs created a beautiful device nailing it on usability.
To choose what type of host you are about to connect the Leef to you simply push a button located in the middle either way.
A button with a plastic strip makes the switching easier with the bayonetted solution.
In the package you also get a lanyard to attach with a tiny Leef logo on the end of the string.
As the speeds are more than satisfying in read/write operations there shouldn't be any obstacles for watching videos stored on the stick on your Android device.

Now is it pricey?
Not really, you can get the 16GB version for 17.99$ or go for the 32GB variant for merely 29.99$
Recommended app for file management is Astro file manager but during this review Root explorer worked without a hitch.

This is a great product worth it's price , I am sure Leef will take it's place on the market with this one.
Androidistica can warmly recommend the 'Leef bridge' for anyone using an android device.
Now head over to Leef and get yours now !

This review was made purely on a Android powered device as was the photo taken for this review.
[YOTA] 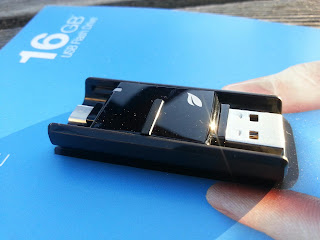