Released a few months after the big brother phone HTC One , the HTC One Mini presents an experience of Android 4.2.2 with a minimalistic feel.
This is largely affected by the screensize and portability of this device.
HTC One mini aims where a lot of the high end phones are not.

Although its 4.3 inch screen looks a bit dwarfed by such as HTC One (review coming on that one later one)
the performance and the visuals are impressive.
Now , what does he mean by that ? You might ask.
Well, taken into consideration that this phone actually fits in your pocket without reminding you it's there when bending, sitting or walking  the HTC One Mini takes its spot on the market honorably.
Seeing the specs does not make your eyebrowse flip over your head but this is not intended by HTC One mini either. At least thats my impression. 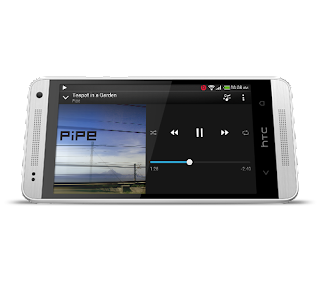 The casing is one of HTC:s aces up their rocksleeve.
Backside of the HTC One mini being aluminium, tightly integrated with the edges and frontpiece you really can feel a good build quality.

You have your microsim slot accessible by a small pin that is shipped with the phone, volume buttons on the right hand top edge, power button on top left edge and micro USB port on the bottom right edge .
No external SD Card support here.
The built in 16GB of storage combined with complimentary Dropbox storage should keep you going for quite a while really.

The Micro USB does not support MHL, so this little baby will not let you display anything via a MHL Capable docking station or such.
Backside camera is LED flash enabled with 4 MBpixels, autofocus and face detection built in with it.
Video recording coming with 1080p skills.
This is an achilles heel for the HTC One mini but it regains a respectable position via other features.

Were talking Beats Audio enhancement.
Yes, if theres a device capable of booming your music properly the HTC One Mini is up for it.
Without being an audiophile even my ears recognize the "oomph" coming via the earbuds shipping with this phone.
All in all, HTC Sense UI, Corning Gorilla Glass 3 and the 4,3 inch screen do deliver a sense of freshness in itself.
However, there could always be a bit more RAM memory to go with, 1 GB ram on a 2013 device feels a bit low.
Dual core cpu does the trick certainly, but it will keep you waiting at times where a Quad Core would snap you right into business.

Pricing is a bit on the boasting side when it comes to what the HTC One Mini performs.
The reasons behind this may vary naturally and with the release cycles of today for new devices wer are sure to see a price drop as soon as HTC pulls out newer devices of their bag of tricks.
Alas, the HTC One Mini stands for what it is.
There is no fake skimming on top of this cake, look at the specs and thats what you get.
If youre not fancying the Phablet fever and need a solid,sleek device with awesome audio capabilities then the HTC One Mini might be the one for you.

Next up: Review of HTC One.