Announced February 2013 , the HTC One was highly anticipated until it was released march 2013 .
With aluminium backpiece , 4,7 screen at 1080 x 1920 resolution and a Quadcore cpu this phone entered the arena with a bang.
The build quality is good , casing and volume buttons made of aluminium, display made out of corning gorilla glass and an ingenious placement of an IR eye in the power button shows that hours have been spent designing this one.
Equipped with Beats audio enhancement the sound bits and pieces are made with quality as well.
Compared to its little brother HTC One Mini the similarities are striking on the outside.
The added punch compared to the HTC One Mini is obvious once you start the HTC One .
The Android version onboard is 4.2.2.
Reports are coming that Android 4.3 is slowly rolling out worldwide for the HTC One as this review is being written.

The only quirks felt with the casing is the aluminium itself on that back piece.
Autumn in the air and winter coming the air gets dry and so does the skin on my hands .
This makes aluminium slippery in hands.
Of course this is not a showstopper, smartphone case market is booming so naturally you'd get yourself a dashing case for the HTC One too. 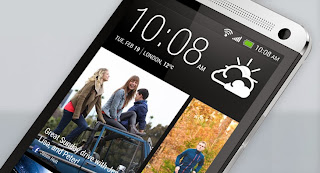 Another nice feature is the built in IR module.
This enables you to control your TV and Cable box using the HTC One as a remote controller with the installed TV app.
You can view the EPG, set alarms for your favourite shows and so forth.
Very nice!

All in all the HTC One is a solid phone, with solid performance on all fronts.
The camera featuring the Zoe-mode, Boomtastic sound and sleek design puts HTC One in the top segment of smartphones.

So, HTC is still a player to be counted on in the Android segment of Smartphones nowadays.