March 2013 Androidistica was fortunate enough to do a hands-on review of the Jynxbox Android HD.
One might think Jynxbox were content and pleased releasing this media streamer powered by Android and rest on their layers but that's quite the opposite.
Jynxbox has now released the sequel to their table top streaming family , the Jynxbox M6.
This time we have less with more.
Let me try to explain. 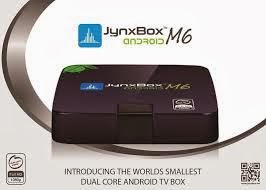 The Jynxbox M6 itself is smaller in size but has more power inside.
The UI is completely revamped and the Android version has been updated to 4.1.2.

Thanks to the dual core cpu (Cortex A9, 1,5 GHz) the first impressions navigating in the system is a snappier feeling.
Response times are shorter and the revamp of the UI also helps while navigating between the sections of apps.
Wifi signal was a bit struggling on previous Jynxbox versions even though there is a ethernet jack on the Jynxbox Android HD, this is also added to the Jynxbox M6.
The M6 has a stronger Wifi signal.
This brings us to the hardware :

Onboard memory is 4GB NAND flash and you get 2 USB 2.0 ports with the traditional microSD card slot , supporting up to 32GB size memory cards.
Media playback format support builds a long list of possibilities:
"AVI/RM/RMVB/MKV/MWV/MOV/MP4/WEBM/DAT(VCD format)/VOB/MPEG/MPG/FLV/ASF/TS/TP/3GP"
Pretty much got everything covered in that department i'd say.
Another addition is the CVBS Video out option. This means you could hook Jynxbox M6 to your "old" , non-LCD/PLASMA TV set without the need of HDMI.
(Adapter included in the package for CVBS)
Of course, we all know that HDMI is the sharper of the two, and this is naturally included too on the M6.
The two USB ports support NTFS formatted USB harddrives, Keyboard and mouse if you will.
In the box you get the Jynxbox IR Remote but you can of course purchase the air remote and use that if you want . 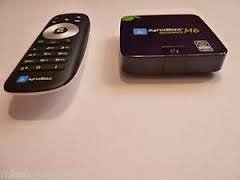 The Jynxbox M6 is capable of whatever a regular android tablet or phone is.
Fully supported Google Play Store is there and installing apps is as easy as on any android.
There are many media streamers out there powered by Android OS and it can be a challenge finding the right one for your needs.
The Jynxbox M6 is a good fit for anyone needing a media streamer with a minimalistic approach.