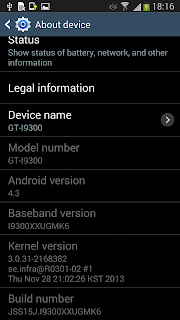 As some of you might have noticed we have a pre-christmas release of official Samsung firmware for both the N7100 and the Samsung Galaxy S3.
Features have been added and yours truly had a go at installing this and so far so good.
Sammobile is kind enough to list some of them with instructions.
Features listed:
- GALAXY GEAR Support
- TRIM Support (Makes the device much faster)
- Samsung KNOX [Only in Galaxy Note II]
- Samsung Wallet (Pre-loaded) [Only in Galaxy Note II]
- Better RAM management
- Core UI elements updated to the ones on the Galaxy S4 (Galaxy S4′s theme all over)
- New Samsung Keyboard
- GPU drivers have been updated (Higher GPU benchmark scores)
- New Lockscreen: Multiple Widgets, improved ripple effect than Android 4.1.2, ability to change clock size and set a personal message
- New screen modes (From S4): Adapt Display and Professional Photo
- Daydream
- Driving mode
- Actionable notifications
- Move-to-SD-card feature
- New Camera mode : Sound and Shot
- New Additions in Notification Centre
- Completely revamped Settings UI (Tabbed interface – Exactly like the Galaxy S4)
- Implementation of Voice controls (Let’s you control various parts of the phone using voice commands – Galaxy S4 feature)
- New Samsung Apps: Calculator, Clock, Contacts, Gallery, Music
- Full screen Samsung apps
- New S-Voice (from Galaxy S4)

Check out the XDA thread for the release here.

If you are not into the Samsung Touchwiz interface there are lots and lots of other launchers available.
We also have some nice developments going on on the 'not - so - Samsung-Android' field.
We've got Omnirom for instance, a really nice and good enough for a daily driver if you are ready to leave the FM Radio and Camera provided by Samsung and replace these with 3rd party addons .
Then there is one of Androidistica's favourite ROM's , the SlimKat.
Second week on weekly builds now and surely suitable for a 240DPI daily usage .
Check out the detailed info here.
And last but not least:
Warranty voided by installing these ROM's is the users responsibility to be aware of .