Ever felt the need to transfer files to or from your Android device to or from a PC or
MAC ?
-Now where on earth did I put that micro USB to USB cable again?
-Aww shucks! Left it at work...

This scenario is a way too familiar one for anyone who owns an Android device.
Sure ,we got cloud storage these days . There's Dropbox,Skydrive, Google Drive ,MEGA
and Box to mention a few .
How about those times when you just need a more practical and immediate way of
transferring files? 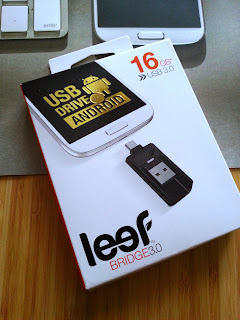 That's when Leef Bridge comes into play,shining like a diamond.
Androidistica has reviewed Leef Bridge before.
This time we got the same device with a lot more 'oomph' in the throughput department.

Fast recap of the basic functions:
-Leef Bridge comes equipped with two different sized USB Connectors.
1 Standard USB and 1 Micro USB port.
Micro USB for Android 4.1 powered USB OTG equipped devices .
Standard USB port for any supported OS and Hardware that supports read/write to/from USB Storage.
Depending on which of the connectors is extended we have Leef Bridge storage available for that .

Add a handful of devices to that list that are unofficially supported and you are seeing the width of usable devices with the Leef Bridge.
Prerequisites are Android 4.1 or higher and USB OTG supported hardware.
Even iOS users are being thought of according to a statement on the Leef websites FAQ section.

Transferring files from Leef Bridge to a PC running Windows 8 clocks in at around 68MB/s .
(SSD Disk on that PC i might add)
Reversing that process , taking files from a Windows 8 equipped PC to the Leef Bridge renders in 11MB/s write speeds.
Transfer speed from the Leef to a Samsung Galaxy Note 2 (N7100) Internal SD Card times in on 19MB/s .
The other way around we got 8.8 MB/s.
As a nice and excellent feature the Leef bridge is even supported in CWM Recovery v 6.0.4.3
This is a nice addition to those of us who flash custom rom’s on occasions and need to do a Nandroid backup or restore from time to time.
Just pop in the Leef Bridge before rebooting into recovery and the Leef Bridge will be mounted as a selectable device for you to use.
Summary:
-Faster transfer speeds.
-Loads of devices supported (including custom recoveries like CWM)
-Smaller form factor, smarter designed bayonette push-button switching between modes of operation.
- Bang for the buck, these devices are inexpensive and genuinly built.
-Buy or Shy ?
Definetly a Buy!

Now, quit stalling and head over to Leef and grab yourself one before it's too late!

Big ups for the team over at Leef for letting Androidistica take a spin on one of their excellent pieces of equipment !