Handheld keyboards and pointing devices have become a daily household product for many of us who have a TV-set to plugged into a gaming console, Android TV-Stick or a Smart TV.
You might remember Androidisticas review of the Slimline BT keyboard.
This time were having a closer look on the Rii Mini ONE Keyboard/Touchpad/Air Mouse/Audio - device.
Built-in functions is the name of the game here ladies and gents. 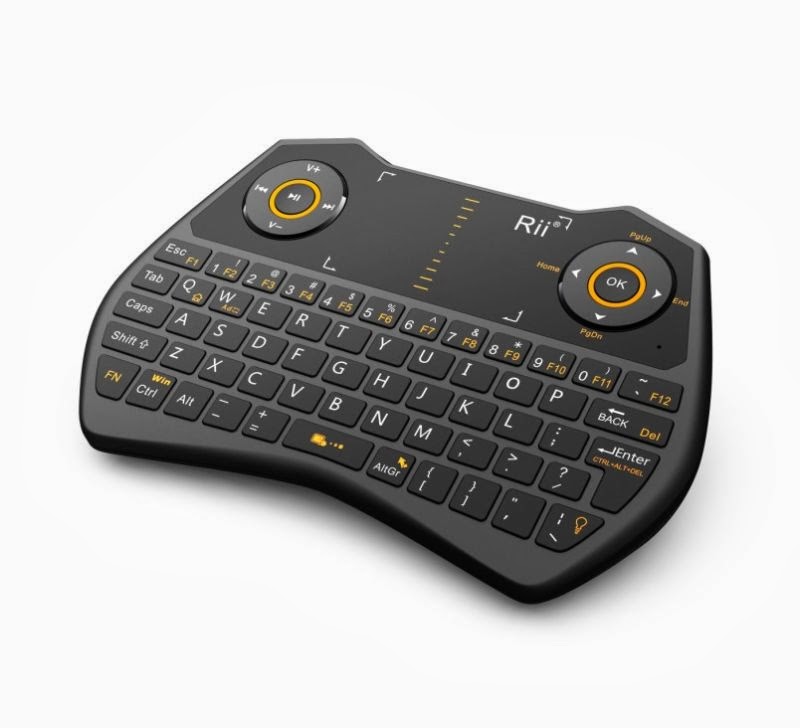 As you can see from the image above there's loads of buttons on this one.
We have the QWERTY Keyboard complete with F-keys, Esc, Tab, Shift and all the rest you might recognize from a full sized computer keyboard.

The Rii Mini ONE comes with backlit keys, touchpad , directional buttons, two front bumpers and a audio headset outlet which can double as a microphone input as well.
Platforms supported are Android, Windows , MAC, Linux, PS3 and XBOX 360.
Plenty of feature in other words.
All the buttons on the main keyboard are rubber, and the palm rests on the bottom are of some sort of leather feel structure.
The Rii One feels light in weight when picked up and the build quality feels almost premium.
No need to add any A-class batteries since we have a lithium rechargable battery built in which you charge via a microUSB port that sits next to the on/off button. 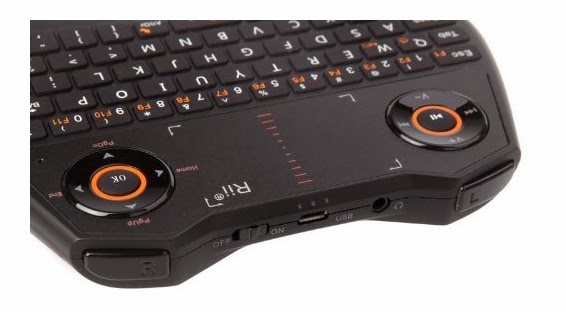 On the backside we have a small tray where we find the Mini USB connector.
Upon plugging the micro USB transceiver into a Samsung Smart enabled TV we got a blue cursors on the screen and the Air-mouse function of the Rii Mini ONE presented itself.
(The Magic happens via 2,4Ghz Wifi, range said to be 10 meters without disturbing elements)
With the right hand side circular button one navigates in menus and the middle button for confirming .
The left circular button has playback functions like volume up/down, fast forward/backward and play/pause.

So whats the verdict then ?

I wouldn't write a book on this keyboard as there are better options for that.
The touchpad function was a bit iffy , the placement of the pad being in the middle of the keyboard felt a bit misplaced as did the responsiveness . I preferred the Air-mouse over the touchpad .

I'd gladly use this keyboard as a Media streamer remote with the good playback functions.
Even voice chatting should work well with this keyboard as web-browsing or typing chats, logons and other easier tasks.
I'ts a shame we dont have two analog sticks instead on this keyboard, because that would make it a killer-gaming keyboard for any of the supported platforms, like an  Android HDMI-stick or Streaming Box of any sort.

If your in the market for a light, slim, backlit keyboard with added audio functions the Rii Mini ONE should be seriously considered as a purchase.


Handful of thanks to W2COMP for having Androidistica doing a piece of their Rii Mini ONE.
at January 16, 2014