To begin with there was a time when Androidistica made an attempt to go 'All Android' on all I/O doings in the daily life.
Browsing news, editing photos, paying bills , blogging and all that we might do on a more crossover manner via handhelds and pc:s.

That attempt almost succeeded, but still failed due to limitations in applications or hardware at hand at that specific time.

A new day and a new era , ladies and gentlemen behold the Jide Remix Ultratablet! Now what on earth is going on here ?
Well, i have to tell you this here is nothing more than a device with real potential.

Not bad eh?
Currently the Jide Remix comes with Android 4.4.2 Installed, or almost.
The awesomness dont stop with well done hardware, we have the Remix OS rocking here.
The Remix OS is also developed by the Jide Team with productivity in focus.
This makes perfect sense, because so far we have not seen too many hardware mannufacturers focusing on productivity .
The Jide Team aims for great hardware with great software and the result is the Remix OS.
A Android Lollipop version is in the works , being published to mainland China as a first resort.
The rest of the world is next, mid-June 2015 according to Jide Team. 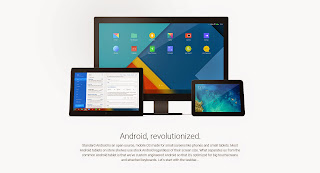 In fairness this post cannot possibly cover all the aspects of the Remix OS but let's say "Optimized for tablets", "Taskbar" and "multitasking" with windowed applications side by side.
The testing of this device has just begun for me so see this as a short introduction of whats coming in the near future.
Don't touch that dial kids, were soon back with more.

And remember to hit this post with comments if there are any specific things you might want to know or have tested on Jide Remix .