A little look at and a review of YotaPhone 2

I noticed and read some about a new idea of a phone already in 2012 and also saw pictures of the prototype in 2013. I followed the concept since it was a new approach on smartphones.

In 2013 it was a phone like many others with not so impressive hardware but interestingly it had a 4.3 inch HD display and also a low-res E-Ink display. But the concept and idea was getting a lot of attention, and therefore my attention, and since then I have followed the development.

I have used Samsung for several years and have had a Galaxy, Note and Note III and lately my Note III did not work very well. I have had stock ROMs on them all the time but both hardware and software had glitches and problems that annoyed me, so I started to wonder what I wanted and if I actually needed a smartphone.

One of the things that got me to wonder if I needed a smartphone or not is my Nexus 7 2013 with LTE. I have it with me almost all wake time, and since I usually use that more and more since it works so well i use it a lot and the need for a new smartphone is less and less. But when the phone function don't work as intended all the time the annoying need for a new phone came up.

I followed Yotaphone in the media and the new phone Yotaphone 2 was released in December 2014. It was available for ordering in 2015 and as I followed the Yotaphone on Facebook I got a FB offering of 20% discount that lasted for a week, so started to look at it with a new kind of eyes.

It is basically two phones in the same box. An E-Ink screen with instant on or actually always on screen with functions like phone and some widgets and with promises of even more functions in the future i thought, “What the heck, I’ll go for a smartphone again!”.

I checked Yotaphone’s website and I was impressed by the fact that the page was available in so many languages and also the shop and support was in my own language (Swedish). The shop itself was in Swedish and so i ordered the phone and the bumpers to protect the phone.

Fast delivery is always a good thing when ordering online and I was impressed since it was shipped within EU from Austria with tracking info available and shipped fast.

I like quality and Lenovo computers have always had a very good quality of plastics. The box that the Yotaphone 2 came in had the same kind of plastic, almost greasy but with a good grip and good quality. 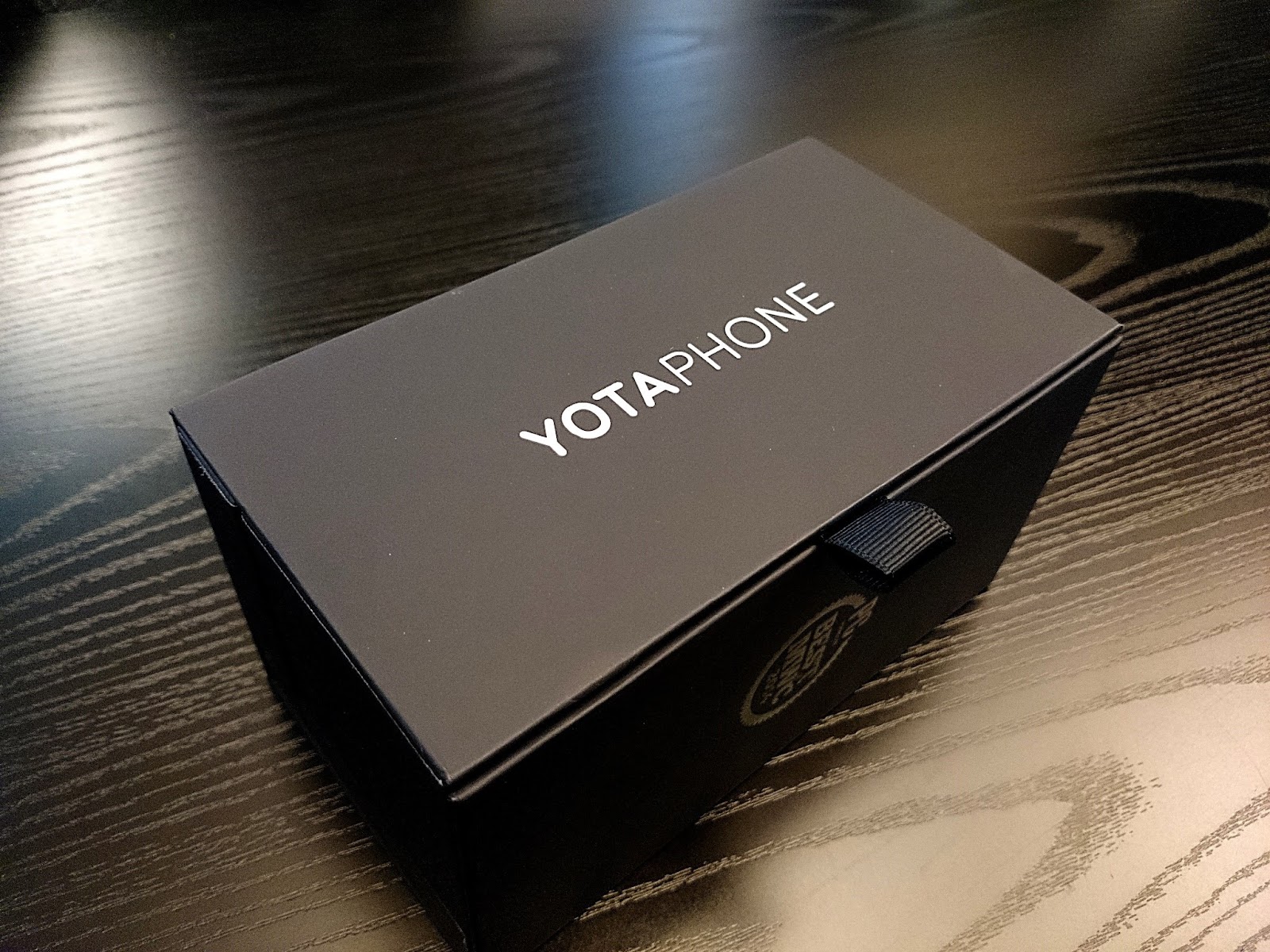 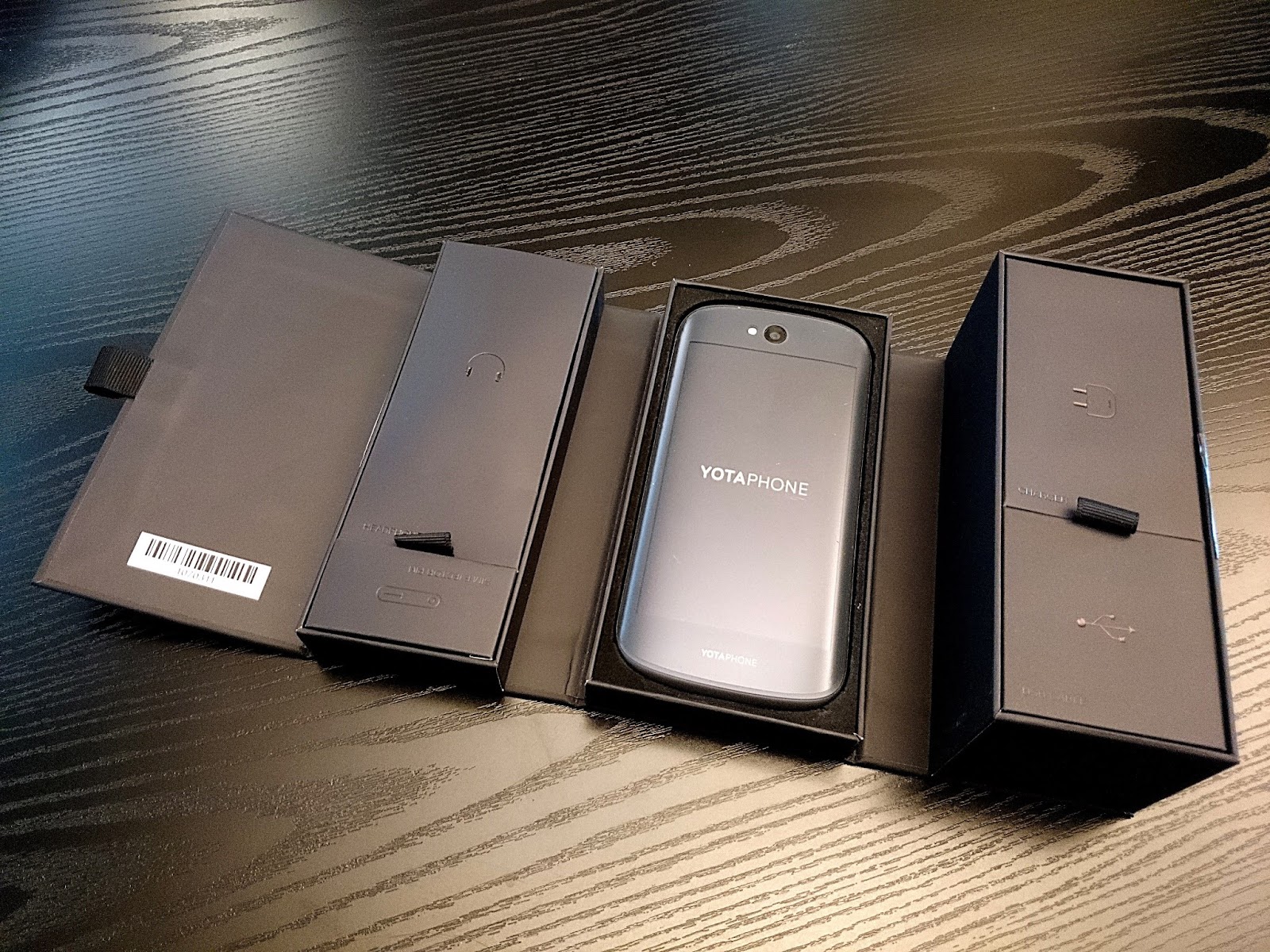 The box itself had pullout boxes with everything easy accessible and the normal type of things like headphones but with a twist it arrives with as many as 10 different rubber cones and accessories. An USB charger with an output of 1.5A, that's more than most usual 1.0A chargers that usually arrives with phones, and a cable that is flat so it doesn't tangle up and get the mystical knots that all round cables get. 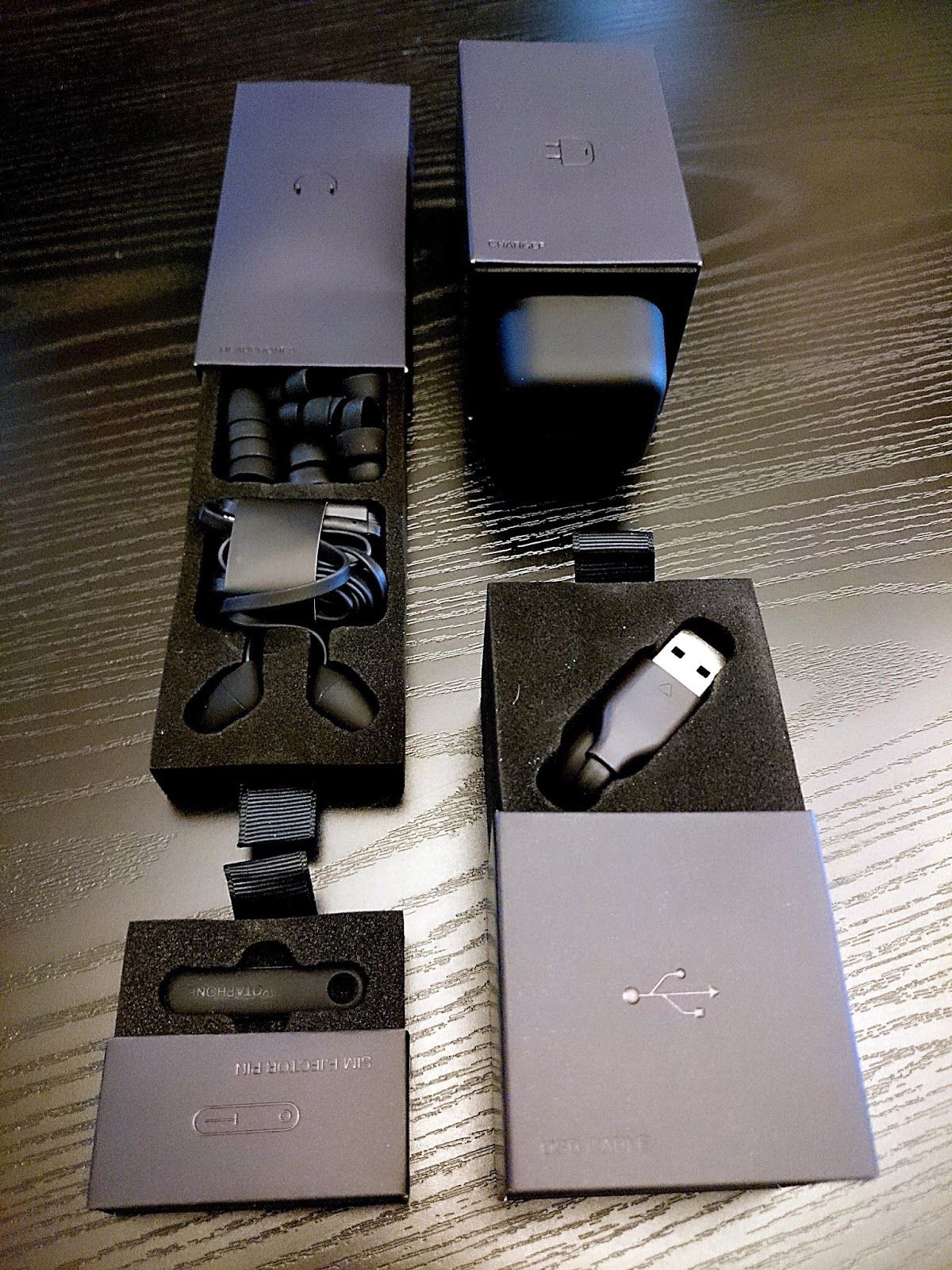 But now to the phone, when it arrived it had Android™ 4.4, KitKat® on it out of the box. When closing it down it makes usage of the always on screen that states Yotaphone. It was kind of impressive already from box. The startup and first usage was as most Android phones, add or create a Google account and after that some info on the phone’s usage of the Yota Panels and Yota Widgets that is (or was) two different things in Kitkat.

First impression is the build quality when holding the phone, but it really needs the Bumpers to protect it from being dropped easy! On one side it has a full-HD 5.0 inch 1920x1080 flat display and curved sides. On the other side a curved 4.7 inch E-Ink display 960x540 with 16-level gray scale with full capacitive touch and a resolution of 235ppi that is protected by a Corning Gorilla glass 3.

With displays on both sides the phone really needs the grip from the bumper. It needs to get repeated several times to protect you from dropping it by mistake. 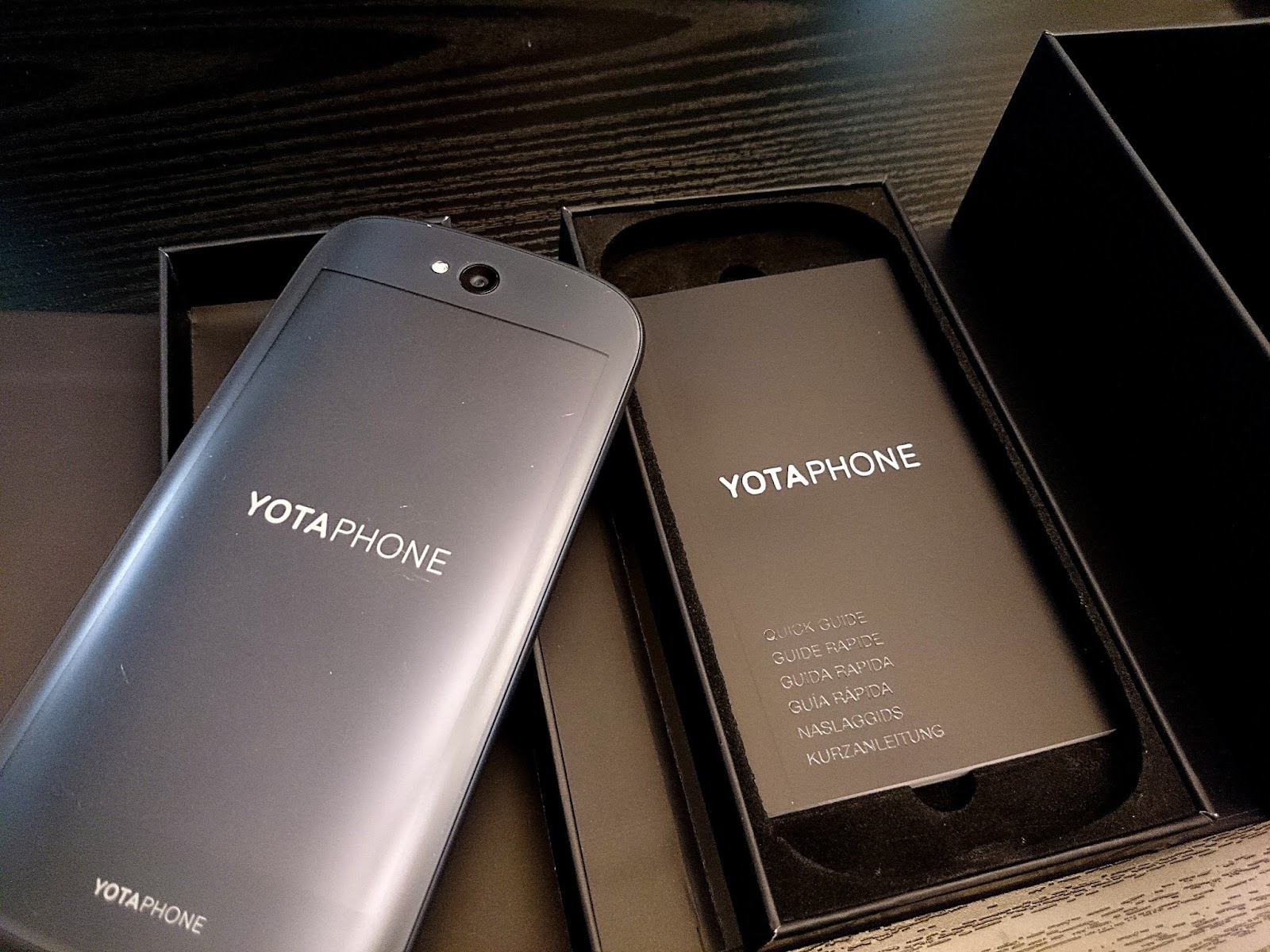 The phone has smart functions, like it "knows" what display is up and acts according to that. The phone is equipped with three physical buttons, the On button and volume rocker. They have in some ways several functions, the On button locks or unlocks the display that is facing up. That's really handy!

I contacted Yotaphone on Twitter and they replied fast that Android 5 is in testing and soon available. In the meantime a small update arrived. But compared to Samsungs delivery of, or I should say non-delivery of, updates I would say it was impressive since android 5 was delivered with new and better functionality.

I will focus on functions in Android 5 and not from my experiences of it from Kitkat. Well from the locked HD screen it has links to go directly to phone or camera or only unlock the phone. And when locked notifications in the middle is also a shortcut to going directly into whatever that is a notification of, a double tap on the notification and you are in, unless locked with a code or something.

The E-Ink experience I had was almost zero when combined to touch technology so I was very curious about the functions and how it would work. 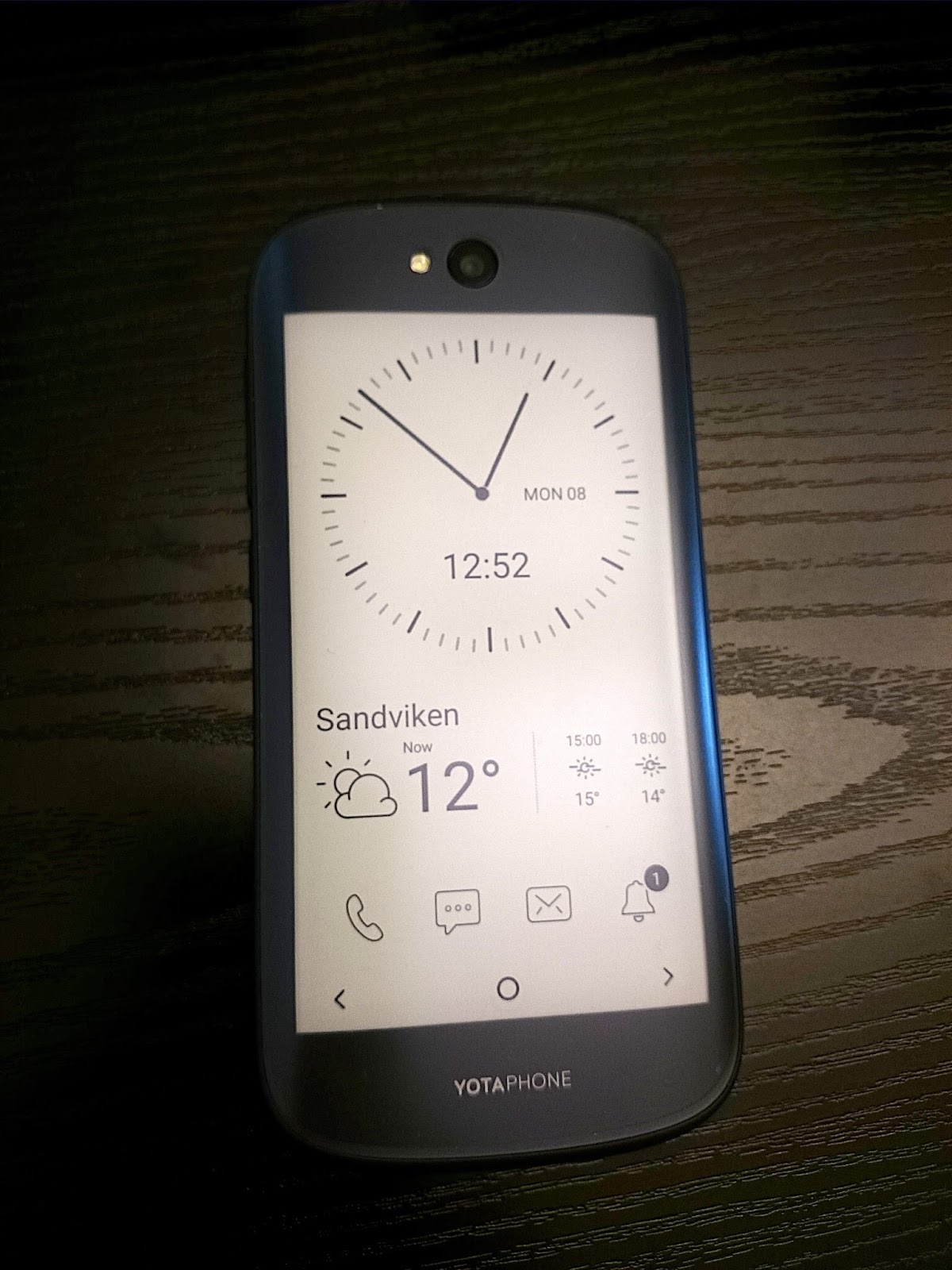 When adding the E-Ink screen as done on this phone you actually get two phones in one, you get a phone that has full and perfect screen for using it in the sun since the screen gets better the more light it gets on it. The e-ink screen is not backlit but it mirrors the light and gives you a graphics screen with the old LCD possibilities to be seen in full sun. That is a superb idea and when having the possibility to modify it it's a great idea.

On the same screen you get notifications of for example Phone Calls, SMS and general notifications on the other screen weather and an analog big watch on half of the screen. And except all the notifications you get you get full applications for some stuff, for instance the good chat software that is free and encrypted Telegram (http://telegram.org) is named Yotagram and have full functionality that's great. Instagram and mostly Twitter have a full function client for the e-ink screen. 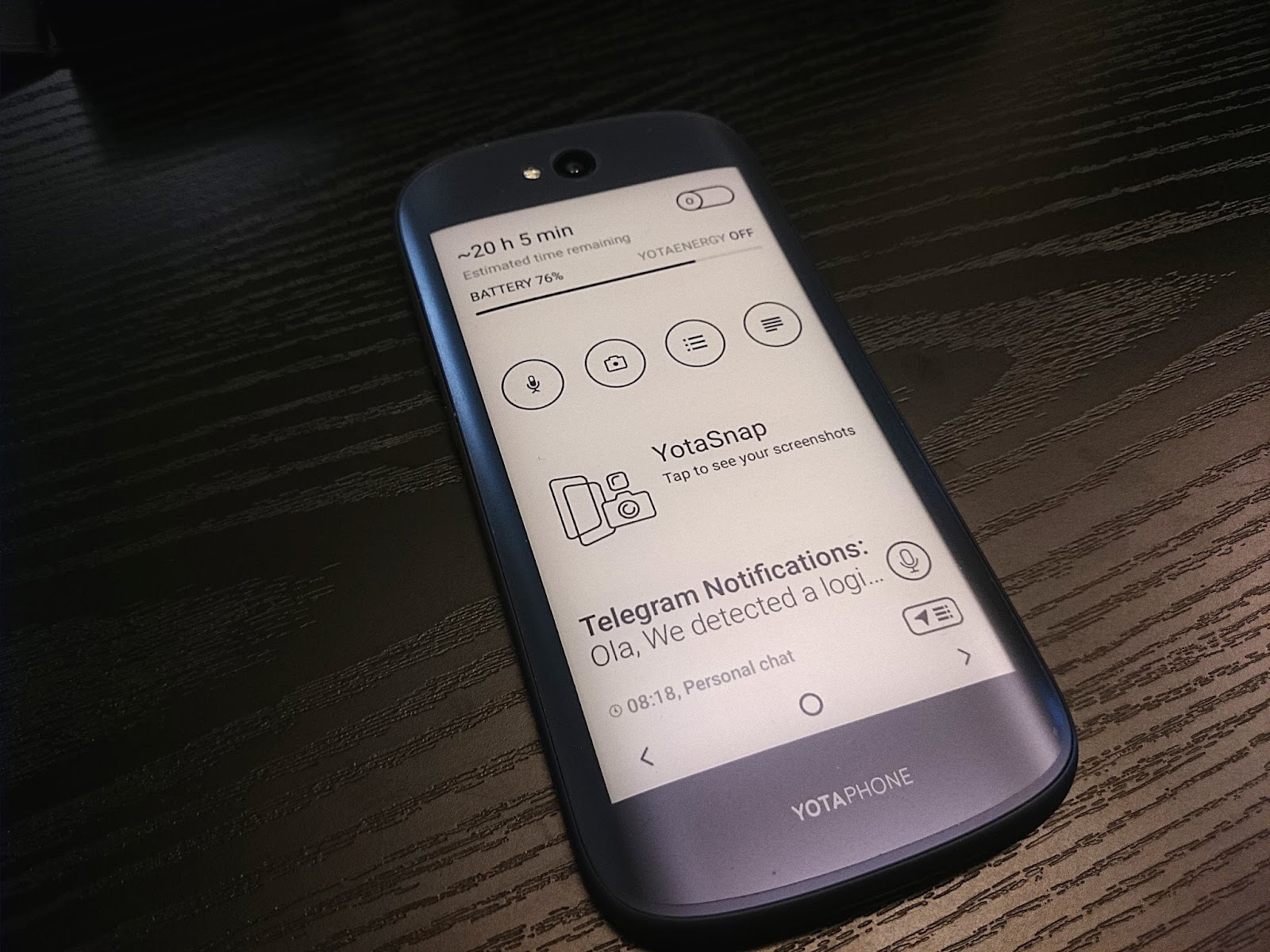 What do you get or not?

If you don't use the E-ink screen you get an average android phone with battery life as most android phones ... Charge every day unless battery should go flat, if you have many social media apps.

But if you use the E-ink side and the apps you get a new world and battery for two full days or even more! A fully functional smartphone that works great in the sun and is easily readable. There is a growing number of full E-ink software and widgets that give you a lot of fun.

If you are tired of bad battery time it is time to experience a new kind of functionality. If the software isn't available yet, well mirror it from the normal HD screen and you can run most stuff, even video, on the E-ink screen.

Easy reading outside and in the sun

Very customizable for your own needs

Easy to take screenshots and easy to see them directly

Easy to use and customize for most users

Am I happy with it? Yeah I like it and grow more and more into using the phone as it is meant (E-Ink) usage as much as possible. And if they get more apps it would be super and I would love the phone even more.

Would I buy it with my experience of the phone? Yeah I would, and I sure like the both of the best of worlds! The fast and easy phone and SMS and E-mail possible apps and the "full" HD screen.

What would I change if I could?

Larger screens on both sides if possible. (6 inch or larger and high-res E-ink screen)

More accessories like the bumpers and rugged cases and so on

This review was made by the awesome and always excellent Ola Larsson
Androidistica sends barrels of thank-you's to him for this grand review.
at June 16, 2015