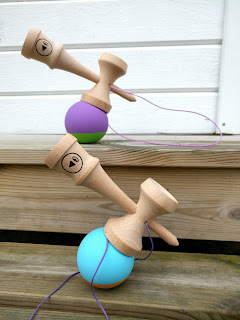 Some time ago we reviewed some Kendamas from Playkendama,
The people over at PlayKendama have kept on evolving their Kendamas.
We hereby present the Play Grip II K .
Now , as alway the Kendamas from PlayKendama conforms to a number of criteria:
Fullfilling the European standards for flammability, containment of unhealthy substances in paint and more safety precautions when manufacturing products.
These are safe Kendamas!
Not many Kendama brands do this, which is why PlayKendama sticks out and claims their unique position out there . 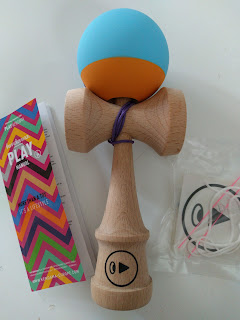 The Play Grip II comes neatly packaged with a spare string and a little booklet with basic tricks described.
The development that has been added to this Kendama  :
- Improved Ken Shape
- Self Developed Sticky paint
- New string design
The last is not described by PlayKendama but an observation done , comparing with the last series of Play Grip K kendamas.


So how does it play then ?
Very well i'd say.
Not being a pro player, and only been doing Kendama for a year now the Play Grip II K feels solid.
The two sided painted Tama works really nice with the matte grippy paint and i also like the new string which adds stability .
The new Kenshape is a discreet change, it feels comfortable and does not occupy my mind at all.
Design is not changed in  a major way, just a few small adjustments are made to the Ken shape.
It finds it's home in hand very well. 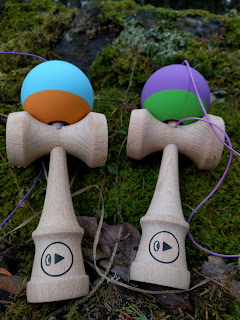 -First Impressions :
PlayKendama delivers once again, bringing their Kendamagame even further.
The whole package presents something new, which it also is.
Never forgetting the basic tricks with a small leaflet is a nice way to keep attracting new players .

-Recommended for, suggestions, comments:
This one is a daily slayer. Beatiful design with new matte paint and grip .
Discreet alterations to the Ken shape increases playability and comfort.
Recommended for any player, new and old ones.