A long a time ago there was a young boy who got fascinated by the Role Playing Games of the 1980:s.
There were Dungeons and Dragons, Middle Earth Role Playing Game (MERP),Mutant, Lone Wolf Solo adventures  and much much more.
These games engulfed a big portion of that boys youth, bringing joy, excitement and thrills for many hours in those days.
That youngster is now grown up , with two children of his own.
Whats the state of RPG:s today ?

There are a lot of games still being developed and to my utter joy there are even Role Playing Games aimed for younger people .
This is where todays review is focused , 'Sagospelet Äventyr'.
Born out of storytelling between father Daniel and Julia Lehto, the game Sagospelet Äventyr ('Storygame the Adventure' in english) evolved into something bigger than they originally thought .
(Daniel himself played RPG since he was 7, and when Julia was 5 years old she discovered her fathers old RPG games and got curious.)
Telling stories, where both Daniel and Julia added their own ingredients into it , they decided to bring their saga to the public , and so was the idea of a game born. 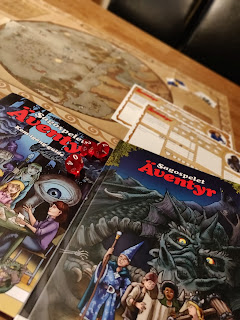 Sagospelet Äventyr can be seen as a entry level RPG for young people, mixing traditional Role Play Gaming with interactive actions such as baking recepies out of the books with your players, getting outside to solve parts of a quest and other imaginary solutions to add to the more traditional gaming.
Sagospelet Äventyr is a complete Role Playing Game experience that can be played from 5 year olds and older.
It is a beautiful thing, to be able to introduce my own children (Swedish speaking) into the fantastic world of Role Play Gaming on their own terms.
Thanks to Sagospelet Äventyr it is possible. 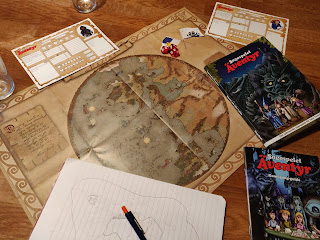 Now don't mistake this for a light version of world creation.
So far Sagospelet Äventyr is available in the following forms:
-Starterbox with a 128 page Rulebook , starterleaflet, 3x dice and pre-made character sheets to get your game going fast .
In addition there are:
-Worldbooks I and II, covering the history, geography and creatures of Masonias surrounding lands and seas .
And if that's not enough to get your juices running, there are 2 colouring books with themed images from the universe of Masonia.
More ? Of course there is more , 2 storybooks featuring tales with heroes and heroines from the worlds of Masonia.

It does not end with the above, there's more coming.
A worldbook III is covering the creatures of Masonia, frightening monsters and even kinder ones .
Worldbook 4 is to be released december 2018, covering 'Komino' the island of animals even.

In addition there's the world map, which is beautifully illustrated , covering all the lands and seas surrounding Masonia. 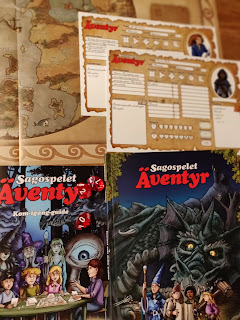 This is truly an impressive package.
Kind of like RPG campaigning for preschoolers.
Upon testdriving the intro campaign with our children, aged 8 and 10 they first went into clinch with each other.
They missed the point of RPG gaming being heavily dependent on teamworkd, since they never played it so it's no wonder.
I as a GameMaster had to stress the fact that to be able to let their player characters survive  they must cooperate.
Once this fact was stated, and a necessary portion of scepticism was digested they were well on their way with solving the introductory campaign.
Need i say they want to play more ?

Sagospelet Äventyr is now on it's third printing so popularity is no understatement here.
There is a market for this flavour of RPG:s without a doubt.
Rumours tell, there might even be International versions coming in the future.

A big bowl of "Thankyou-stew" to Eloso Publishing  and Daniel Lehto for letting Androidistica testdrive their Epic RPG.
Make sure you check them out !