Back in the 1980:s  there were a type of games we spent a lot of hours with .
(This was pre-internet era, pre gaming consoles as we know them today.,and yes, two tv channels only. )
The game consisted of something called Game Master, custom dice-set and stories where only your own imagination was the limit.
We called them Role Playing Games.
RPG.

Mutant was released by "Äventyrsspel" amongst other RPG games such as Chock, Drakar och Demoner (The Swedish version of Dungeons and Dragons).
The setting of Mutant was a post-apocalyptic era.
Humankind wiped out themselves almost completely from planet earth and by various environmental effects such as radiation and pollution some inhabitants inherited mutations.
We are talking old school RPG.
It was a time of mystery and magic, death and discovery.
Those of us who came across the experience of RPG will never forget the adventure, suspense and devastation thrown upon us via these games.
There is no such thing like a well played RPG.


The legacy of Mutant and other good olde RPG:s is carried onwards into the new future by companies such as Free league publishing. 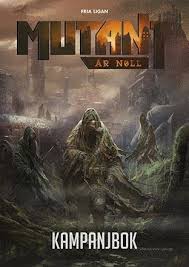 "Mutant Year Zero" has transformed, evolved into a new game system but the setting is familiar.
The world is near it's end, humankind has wiped out most of the world as we know it and it's now up to the players to find and put together the pieces of what's left.
In Mutant Year Zero all inhabitants are more or less affected by various mutations which are randomly assigned during character creation.
Thats right, here we all are mutated.


During the first game night there are characters to be created, and decisions to be made like deciding what the arc itself is built upon.
We also have "The Arc", a settlement which acts as a starting point for all Players.
One does not necessarily have to start from an Arc, that's up to the almighty GM and the players to decide of course.
In each Arc we have "The Elder". A survivor from the old times, with infinite wisdom about the surrounding lands and how things were run back in the old days.
We also have bosses in each arc, often multiple bosses with colliding agendas.
Can you sense the plot thickening yet ?

The Core rulebook and Campaignbook covers are designed beautifully.
Page layout, sectioning of the different topics is logical and on point.
The artwork is superbly done and creates a nice theme , drawing you into the post-apocalyptic gritty world of Mutant Year Zero.

The original Mutant rulebook was a bit thinner in pages .
There is plenty of good information to digest, and the rulesystem is not your traditional T6, T3, T8  and T12 anymore.
Mutant Year Zero utilizes Cards and custom dice sets of D6.
Three colours of them actually. You dont neccessary need the official dice set but having 5 D6 of three different colours is certainly of great help.
(you can find online dice-casters too, but we all know it's much more fun when playing with real dice).
Did i mention Mutant has evolved ?
The format on the Core rulebook inspires GM:s to take the game further than the printed words.

Now, to stop spoiling the game experience for any presumptive players reading this review i will skip any more spoilers from this point on.

Once your characters are created and your team has decided on the Arcs development strategy
(yes, you have to pick a development goal)which can be anything from a water cleanser, to a electrical generator station) you are ready to venture into the Zone scavenging artefacts, old complexes from the past with unknown inhabitants and findings.
But behold out there, it is not safe to travel outside the comfort of your Arc.
Exploring the Zone can be rewarding thought.
Artefacts found  can give you clues to greater things , or even help your Arc to progress in your development project.
You might also be cast into a turmoil in your own Arc, there might be a conflict of some sort amongst the mutants living in your Arc due to lack of food, water or supplies.
Remember, in Mutant Year Zero, everything is scarce.
Everything.

In this game your team, the players have a lot to say.
Forget the 1984-style quite linear role playing style, where the GM read out aloud about where your were, what your task was and who was there with your until you as the players made your moves, threw the dice and went onwards from that.

Here the story can go pretty much anywhere. Your GM is there to support and guide  you on your adventure.
Of course there still are key elements which the GM controls, such as playing the NPC:s for you but in Mutant Year Zero your NPC can also be part of your scavening expedition and your Player Characters might have some sort of relations with NPC:s as well.
This creates a realistical element in your gameplay which i find intriguing .

Recently Free League Publishing also revealed the release of " Den grå döden " a campaign that was originally written and published for Mutant 1984.
Now totally reworked by the original author and adapted to Mutant Year Zero.
Free League publishing has no shortage of pace in releasing titles to keep their players busy, kudos for that!

Are you into the post-apocalyptic era ?
Can you dig a gaming experience where the story is player driven and GM supported ?
Then it's a no-brainer, Mutant Year Zero is for you.
Gather your rations, pick up your bullets and grab that water canteen and get out there!

Email ThisBlogThis!Share to TwitterShare to FacebookShare to Pinterest
Labels: fiction